I entered the 1990s as a gawky high school senior and ended them as a married newspaper editor. In between, we had grunge, Friends and Bill Clinton. I wore a suede vest for an awful lot of the decade and I’m not ashamed.

For That’s So ‘90s Week, I’m taking a look back at some of the pop culture epherma of the ‘90s that sticks with this ageing Gen-Xer. Let’s start with an epic history of comic books in the 1990s.

I’ve been collecting comics for (gulp) nearly 40 years now, but the 1990s was the closest I ever came to abandoning my monthly fix. Marvel and DC’s mainstream comics hit their gaudy nadir, and I was dead broke a lot of the time anyway. But there was an awful lot of brilliance to be found in the spirit of independent comics – Hate, Eightball, Cerebus, Yummy Fur, Naughty Bits, Dirty Plotte, DC/Vertigo’s Sandman – and that kept me going.

Comics in the 1990s were bloody weird, and the latest in the great American Comic Book Chronicles series takes a deep dive into the excess, the creativity and the weirdness of the decade. Reading Jason Sacks and Keith Dallas’ American Comic Book Chronicles: The 1990s brings the kaleidoscope of the decade back to life. This handsome tome is packed with art (the good, the bad and the Liefeld) and more boom-and-bust stories than a Trump business tell-all.

Companies bloomed and burnt like crazy in the 1990s, as the speculator boom took hold and spectacularly imploded. How big was the boom? In 1991, X-Men #1 sold over EIGHT MILLION copies. These days, a comic is lucky if it sells over 80,000 copies. 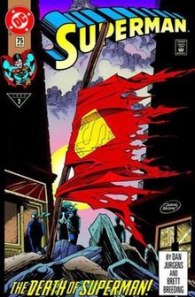 Throughout ACBC, we see the twin poles of creative independence and corporate greed battle, greed usually winning. Marvel sells 8 million comics and goes bankrupt a few years later. DC kills Superman, breaks Batman’s back, makes Green Lantern a mass murderer, chops off Aquaman’s hand (spoiler: they all get better). Image Comics is formed in 1992, and despite beginning with some pretty awful clenched-teeth superheroic angst, it’s still here in 2019 and publishing a diverse and intelligent line of books. Former Marvel editor-in-chief Jim Shooter, on the other hand, keeps popping up throughout the book starting up new companies that quickly fade away. There’s an awful lot of amusing stories about how big Rob Liefeld’s head got.

I’ve always considered myself a pretty adequate comics history nerd, but there were entire publishing companies unearthed in this book I’d never heard of. Sacks and Dallas keep the constant flow of information moving in an entertaining way, and there’s tons of juicy comics-biz gossip peppered throughout.

I’m still not a fan of a lot of what happened in the 1990s – I’d happily never see another chromium-foil comic cover again – but this book is a grand trip back in time, and does a great job of showing how some of the chaos of the 1990s led up directly to the era when Marvel and DC rule Hollywood and a big chunk of the entertainment world. It also reminded there was a heck of a lot more to the 1990s than Spawn and the Punisher and that a lot of the creativity sparked then remains among the comics medium’s high points.