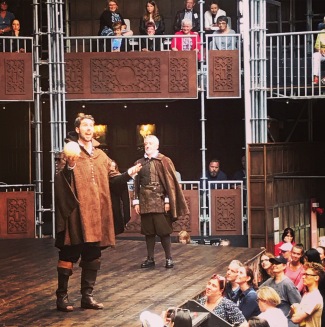 Therefore, since brevity is the soul of wit, And tediousness the limbs and outward flourishes, I will be brief. — Polonious

I’ve been living in Hamlet-land for the past 8 weeks or so, a strange foggy kingdom full of ghosts and daggers and soliloquies that haunt the brain.

As mentioned before, I’ve been volunteering at the Pop-Up Globe replica of Shakespeare’s famed theatre here in Auckland again this summer, for the third season in a row. The centrepiece of this season for me was what’s pretty much the most famous play in history, “Hamlet.”

There’s nothing like watching a play seven, eight, nine times or more to have it seep into your pores, and the Pop-Up Globe put on a marvellous version of Hamlet led by an excellent energetic Adrian Hooke in the title role (and Summer Millett as an outstanding, vivid Ophelia). Watching the show from all around the theatre, with crowds of uniform-clad school kids and groups of Shakspeare fans of all ages from 8 to 80, you can see how this enigmatic, blazing fire of a play has lasted more than 400 years.

I could be bounded in a nutshell, and count myself a king of infinite space, were it not that I have bad dreams. — Hamlet 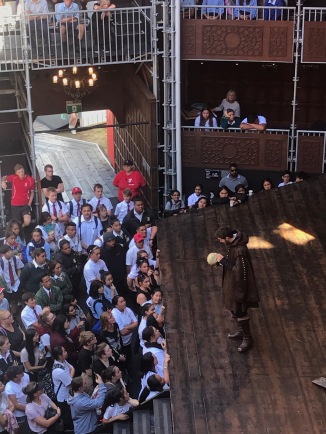 As I’ve said before, I find Shakespeare bottomless – an infinity of meanings can be found in his works, and new twists reveal themselves in every new look. Hamlet is perhaps his crowning jewel as an artist, a play about a young man who asks the question every single one of us asks at some point in our lives: To be? Or not to be?

To sleep, perchance to dream: — ay, there’s the rub; For in that sleep of death what dreams may come? — Hamlet

During my month or so of Hamlet, I read books about the play – Harold Bloom’s erudite “Hamlet: Poem Unlimited” and Dominic Dromgoole’s very entertaining travelogue of the London Globe’s worldwide tour of the play and the meanings wrung out of it, “Hamlet: Globe By Globe.” I watched Tom Stoppard’s Rosencrantz and Guildenstern are Dead, based on his play which takes two minor characters and spins an entire side story out of them. On the bedside table awaiting a re-read is John Updike’s “Gertrude and Claudius,” a prequel. Hell, I even watched the unforgettable trailer for Arnold Schwarzenegger’s Hamlet (from The Last Action Hero, it’s a movie that never really was, but geez how weirdly cool would that be?). Hamlet is impossible to avoid in life.

We defy augury; there’s a special providence in the fall of a sparrow. If it be now, ’tis not to come; if it be not to come, it will be now; if it be not now, yet it will come: the readiness is all. — Hamlet 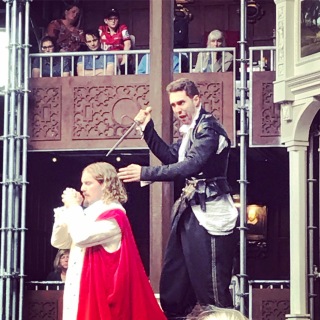 What does it all mean? After hours and hours of Hamlet this season, I’m still not quite sure.

It’s about a young man facing up to his future. It’s about revenge. It’s about lost love and death and the impossibility of a human being ever truly knowing what’s out there beyond the veil. It’s about some terrible decision-making and some mighty low-down bloody actions. In short it’s a bottomless voyage into the human experience and somehow a guy from Stratford-Upon-Avon hit upon universal themes and truths that we’re all still grappling with centuries later. It’s Hamlet, and we never finish it, not really.

We know what we are, but know not what we may be. — Ophelia

One of my highlights of the last three summers has been working at the remarkable Pop-Up Globe theatre in Auckland, a working replica of the famous second Globe Theatre of 1614 that Shakespeare and company used.

Its design closely replicates the actual experience of the punters of 400 years ago, lords and ladies, groundlings and commoners. The Pop-Up Globe, created by Dr Miles Gregory, has been so successful it’s gone on to be replicated in Australia and is now in its fourth season here in New Zealand.

I started volunteering there a couple years ago, and it’s been an amazing experience. You help the crowds, deal with any issues, and get to bask in the glow of some amazing actors performing the greatest plays in history. The Pop-Up Globe has done some smashing productions (A Midsummer Night’s Dream with the fairy dialogue done entirely in Māori and an all-female Henry V are among my favourites) and sold hundreds of thousands of tickets.

I’ve loved Shakespeare since a superb high school teacher (thanks, Mr. Lehman) showed us how the Bard wasn’t all dusty words and impenetrable verse, but a living, breathing body of work that contains some of the greatest stories ever told. Shakespeare is meant to be seen, not merely read aloud in a halting adolescent voice in a dry classroom.

The biggest appeal of Shakespeare to me is that he seems bottomless – you can spend a lifetime studying the plays and still come up with new angles, new turns of phrase and new spins on characters you’d never imagined.

One of the great things about seeing a play multiple times is how it changes, in small and big ways, from show to show. The weather, the audience, the actors’ moods, a quirk of fate. Watching Richard III five or six times in a row and it’s never quite the same show. You get a heroic appreciation for the actors and crew who sweat and bleed for their art nightly.  It’s why theatre will always be there because it’s so cracklingly alive compared to staring at a screen.

A joy for me is seeing how into the plays the audience still are in 2019. This isn’t boring Shakespeare – trust me, when the stage blood starts gushing into the audience during the bloody close of Richard III, you wouldn’t call this stuffy. There’s a witty, relaxed vibe that’s perfect for a New Zealand summer. We get all kinds of crowds – young, old, repeat customers and those who’ve never seen a Shakespeare play in their life.

A big highlight has been working at a dozen or so school shows. You haven’t seen Shakespeare’s gender-studies comedy The Taming of the Shrew until you’ve seen it with a capacity crowd of 700 screaming high school girls.

I’ve just been a tiny, tiny part of the Pop-Up Globe, working somewhere near 50 shows in the past three seasons. But it’s been an immense highlight of my summers and it’s a star performer of New Zealand’s theatre scene. Long live Shakespeare.