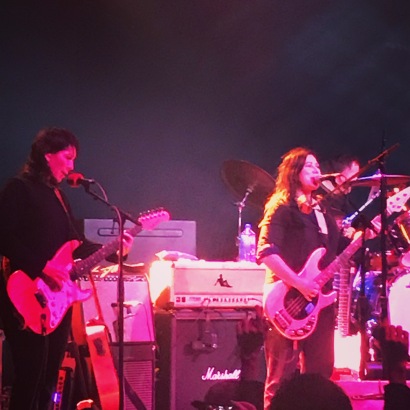 I’ve been on an unabashed ‘80s music nostalgia kick lately, seeing Bauhaus and Billy Bragg in recent weeks, so it was time to move on to the 1990s and the glorious return of that kick-ass combo of rock’n’roll twin sisters, The Breeders, featuring Kim and Kelley Deal.

The Breeders, featuring the line-up that put out their hit album Last Splash in 1993, rolled into Auckland’s sold-out Powerstation last night on the final show of their world tour. It was a loose, giddy affair, with the Deal twins clearly having a lot of fun on stage at the end of a big year.

Kim Deal made her name as part of the legendary Pixies, and was an integral part of their sound, but for my money, her best work has always been the more personal, evocative pop-rock she created when she set out on her own in The Breeders with her twin sister Kelley. The Breeders have been equal parts surreal, goofy and spooky in their career, always anchored by Kim Deal’s crystalline croon of a voice.

The band barrelled through most of Last Splash and a lot of this year’s All Nerve, easily the Breeders’s best of their sporadic albums since Splash came out 25 (!!) years ago (and far better than the newer Pixies reunion albums minus Kim Deal have been).

The sibling banter of the Deal twins was often a highlight, but the powerhouse drumming of Jim MacPherson and bassist Josephine Wiggs anchored the songs with tremendous force.

The band romped through excellent new tunes like “Wait In The Car” and the sultry “Walking With A Killer.” Kelley Deal took centre stage for a show-stopping solo vocal turn in “Drivin’ On 9” while the sole Pixies tune of the night, Kim Deal’s “Gigantic,” had the audience pogo-dancing in glee. And of course, they played inescapable groove of “Cannonball,” one of the coolest songs of the 1990s, which sums up the Breeders sound nicely – rambling, groovy and always taking unexpected turns, combining classic pop riffs with grunge-era clatter and feedback.

(Edit: And here’s another excellent review by the Phoenix Foundation’s Samuel Flynn-Scott)

One thought on “Review: The Breeders, Powerstation, December 11, Auckland”

Hi, my name is Nik Dirga and this is my blog and writing home on the internet. I’m an American journalist who emigrated to New Zealand in 2006. I’m an editor and freelance writer whose work has been published in the New Zealand Herald, Stuff, Radio New Zealand, The Spinoff and more.