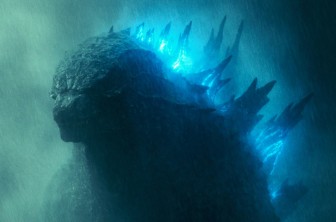 I love Godzilla, because when I’m in the mood, you just want to watch a giant lizard smash the hell out of everything around you. Another big-budget Godzilla movie opened this weekend, and it’s gotten the usual mixed reviews from people who don’t really get the point of a Godzilla movie.

I never heard the word ‘kaiju’ until I was in my early 30s and every hipster with a DVD collection was spouting it, but it does trip off the tongue better than “giant monster movies.” I love all kinds of monsters and aliens, but Godzilla kaiju movies are the pure biscuits and gravy of the casino buffet of cinema. For more than 60 years now, they’ve been stomping along to the same general formula – Godzilla returns, stomps around a lot, fights another monster or two, sometimes Godzilla’s the good guy and sometimes the bad, and there’s always an annoying human-focused side plot or three.

My first Godzilla movie was a battered VHS tape of 1963’s “King Kong Vs. Godzilla”, and to this day it’s one of my desert island flicks. It’s absurd – this Kong looks more like a squashed and mangy grizzly bear than a gorilla, really – but so much damned fun as this duo wrestle and tumble around Japan.

Did you know there’s been an insane thirty-five Godzilla movies since 1954’s original? They range from the Saturday morning-matinee cheese of the “Showa” era to the steroid-infused bombast of the “Heisei” films in the 1980s and 1990s to the flashy, crazed “Millennium” period of the early 2000s. Some of the movies are worse than others, but usually they’re at least worth a watch (except for 1998’s misbegotten “igunazilla” Hollywood bomb, of which we won’t speak again). 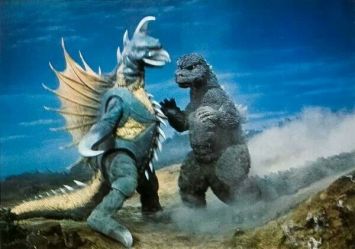 For those who think the current Godzilla: King of the Monsters is wacky, check out 1991’s utterly unhinged “Godzilla Vs. King Ghidorah,” which features time-travel, a ridiculous “Terminator” riff and the spectacle of Mecha-Ghidorah. For those who want something a little deeper, 2016’s “Shin Godzilla” is a strange satire of Japanese bureaucracy mixed up with some of the most awe-inspiring Godzilla scenes ever. For those who just remember Godzilla wrestling other rubber-suited goofballs on sound stages, 1972’s “Godzilla Vs Gigan” is the kaiju-fest you’ve been hunting for, and Gigan, with his chicken beak, massive talons and inexplicable buzzsaw blade sticking out of the middle of his chest, is peak kaiju craziness. Meanwhile, 1971’s eco-thriller “Godzilla Vs Hedorah” (aka “Godzilla Vs The Smog Monster”) features hippies and the goopiest Godzilla nemesis of all. It also features this anecdote courtesy of Wikipedia that’s too crazy not to mention: Kenpachiro Satsuma, the actor who played Hedorah, was struck with appendicitis during the production. Doctors were forced to perform the appendectomy while he was still wearing the Hedorah suit, due to the length of time it took to take off. Let me repeat that: A man dressed as a kaiju had his appendix taken out.

“Godzilla: King of the Monsters,” aka Godzilla II, has all the horsepower of a million CGI-producing gigabytes behind it to produce images the original Toho team could’ve only dreamt of, but at its core it’s just as silly and funky as the guy in a rubber suit movies of the ‘60s despite its Hollywood cast. Thankfully, it takes itself much less seriously than 2014’s too-ponderous Godzilla reboot, and delivers images of almost painterly beauty amongst the mayhem. You get a four-way monster-mash throw down reducing downtown Boston to shreds at one point, and honestly, that’s all I want out of a Godzilla movie. If you disregard the fact that every single human character in Godzilla II should’ve died 17 times over, it’s a lot of fun.

Godzilla movies are an acquired taste. They’ll never achieve the crossover success of, say, Marvel movies or Star Wars, but like I said, sometimes all you want out of a movie is watching one monster shove another one’s head through a skyscraper. And next year, they’re releasing a remake of Godzilla’s championship title bout with King Kong. I’ll be there opening day.

2 thoughts on “Godzilla, or, sometimes you just need to smash shit up”