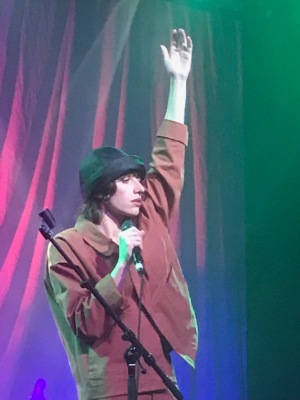 It takes a lot to shush up an Auckland Saturday night crowd with a single look. But Aldous Harding was able to do that with a mere glance at the sold-out Powerstation gig celebrating our home-grown songwriter’s success.

Harding is one of the more unique voices sprouting from New Zealand’s fertile music scene these last few years. At just 29, she’s crafting the kind of edgy crossover career that wins lifelong fans while never sounding like anything other than herself. She’s mysterious and strange, sometimes sounding like an alien come down to earth, with a voice that moves from angelic highs to booming lows with ease, and song lyrics that defy easy interpretation. There’s hints of Bowie, Laurie Anderson and Kate Bush in her work, but it’s all dipped in an antipodean magic all its own. Her “Horizon” is one my favourite singles of the last few years, and her latest album “Designer” is one of 2019’s best.

Dressed something like an extra in a 1990s Beastie Boys video, Harding took the stage alone, with a single guitar, and rather daringly played two of her most hushed, intimate numbers at the very start of the show. The crowd at the bar shushed; you couldn’t even hear glasses jingle, nothing but Harding’s chameleon voice echoing around the Powerstation. It was a masterful entrance by a performer who already clearly knows how to hold attention, and when the slower songs gave way to the full band joining her on the joyously bouncy “Designer,” it was a powerful burst of catharsis and exhaled breaths.

Harding has developed a reputation for her striking performance style, sometimes gurning and contorting her features in confrontational ways. She was less trippy last night than some of her performances I’ve seen, but she still has a gift for upsetting audience expectations with an unexpected twist of her lips, roll of her eyes, or a kabuki-like set of gestures.  The show moved between quieter numbers and ecstatic jigs by her excellent band – there’s definitely a more pop sensibility in the songs of “Designer,” and a song like “The Barrel” is an anthem that still remains distinctly its own thing, with lyrics like “The wave of love is a transient hunt / Water’s the shell and we are the nut” rattling around your brain.

I’ve been to shows at the Powerstation before for similarly stark, intimate shows and left annoyed by the singer being overwhelmed by the crash of beer bottles and the yammering of the audience. That wasn’t a problem tonight. On a cold August night, Harding felt like the hottest thing in town, something new and old at the same time blooming with an energy all its own. She closed with a magnificent, aching cover of Gerry Rafferty’s “Right Down The Line” and terrific new song, “Old Peel,” that left me with no doubt about her future.

She wasn’t much for banter, but she gave us a glimpse of her self as she sighed with a tight smile at the encore, “What a life, eh?” Whatever strange roads Aldous Harding takes to in the future, I’ll be there.